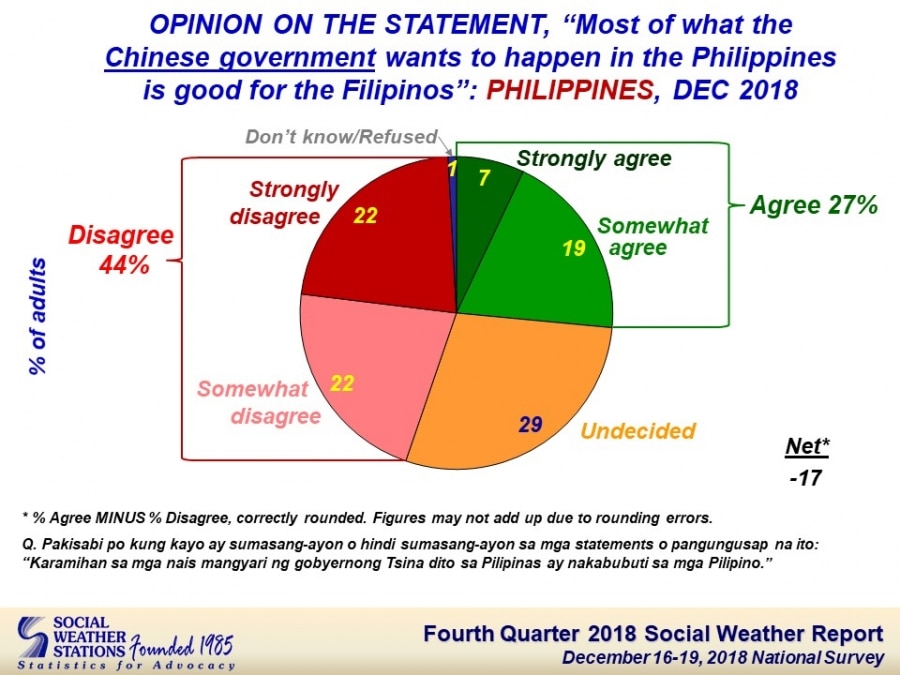 Credits to ABS-CBN News for the infographics.

Well, if 4 out 10 Filipinos perceive China as the enemy, that’s their opinion!

However, if we trust PRRD’s gut feeling that making China as a friend rather than a foe to help the country progress economically by attracting Chinese investments to the country, the least we can do is to change the perception of those 40%.

How? We can start by spreading FB post containing the conversation of netizen Ferdinand Fernandez with a Chinese client.

Fernandez’s conversation with his Chinese client showed us a glimpse of how the Chinese perceives Filipinos and it is an eye-opener if you ask me.

Why? Because while many Filipinos are keeping themselves busy with gossip, the Chinese are busy making money.

The moral lesson of the story? Paranoia will not make us rich while doing business with the Chinese will make us progressive economically.

I don’t know about you but my client right now from mainland China is helping a lot of Filipino IT employees with their starting basic salary of Php60,000 plus Php7,000 allowances not to mention SSS, PhilHealth, Pag-ibig, and Medicard. I directly asked him one time “Do you know that a lot of Filipinos are thinking that you guys will invade us?” He said “Yes we know that but we do not want that drama to stop us from helping locals here in this country. Chinese people are more into business rather than gossips. There was a time that China was in debt and we take loans from the US. Now they owe us more than 3-trillion dollars. The government implemented the 9-9-6.” And I ask what that is. He said “9am-9pm-6days working schedule because our country needs us because we are in debt.”

To be honest, I like talking to this guy because they have a different perspective. He’s telling me how Chinese people do business and it was funny because a lot of them do not require contracts. He told me one time that “Do you know the first thing about Chinese businessmen is that we do not believe in contract.” And then I said “Yeah actually you didn’t ask for one in our project.” He just smiled and told me “Trust. We do business by trust. We talk, we agree, and trust. Fast business. Fast progress.”