Home
viral news
GRPSHORTS says photo of Leni Robredo getting “prayed over” is Catholic church way of saying, “God is on Leni Robredo’s side”?
Prev Article Next Article

Today, April 2, 2018 marks the start of the official manual recount of votes for the vice-presidential position.

While the protestee Bongbong Marcos has so far stayed out of the limelight, Leni Robredo has been all over the place.

Robredo was captured in photos attending a holy mass somewhere, accompanied by nuns in white robes and election lawyer Romulo B. Macalintal.

Robredo, wearing a long-sleeved white polo, beamed with confidence as shown in the photos making the rounds online.

Credits to News5 for the photos.

When asked by GMA News on her thoughts as the long-delayed manual recount of votes start to roll, this is what Robredo has to say:

Meanwhile, Robredo’s photos attending the Holy Mass accompanied by a squad of nuns has been making a lot of noise online. What kind of noise?

Well, the commentary blog GRPSHORTS has an interesting article in reaction to the Leni Robredo spectacle.

According to GRPSHORTS, the message of the church in relation to the Robredo-Marcos election protest is this: “God is on Leni Robredo’s side.”

That’s how GRPSHORTS sees it, no matter what angle they look at it.

“What exactly does “praying over” the lawyers of “vice president” Leni Robredo in the lead up to the vote recount today to determine who really won the vice presidency back in 2016?,” asked GRPSHORTS.

“It shows that the Church is endorsing one side of the dispute and is not really interested nor curious to learn the truth.” 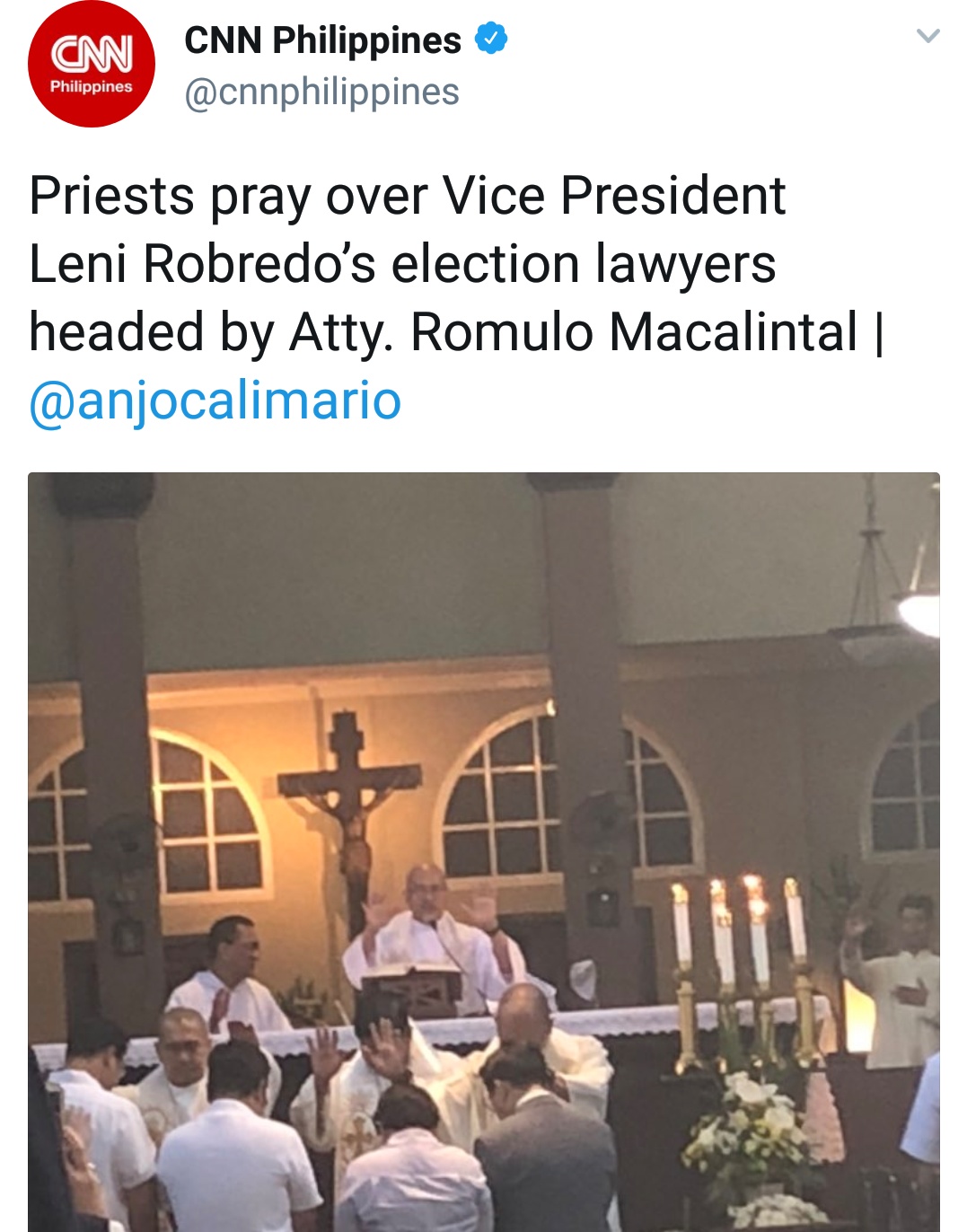 Credit to CNN Philippines for the photo.

In reaction to the unholy alliance of Leni Robredo and the some members of the Catholic Church, Cebuano-based blogger Mike Acebedo Lopez couldn’t help but agree with GRPSHORTS observation.

“No surprise there, we’ve had a good mix of the good and the bad and even the very worst of Christendom the past two thousand years since Christ’s ascension and his apostle Peter became the first pope. (Hey, even Jesus had Judas as part of the twelve. Kayo talaga. Lol)

Yes, while we’ve had a good number of priests elevated to the altar of sainthood, we’ve also had our fair share of corrupt popes, pedophile priests, sinister nuns who later on haunt the living in death, and other bad eggs.

This therefore comes as no surprise. In this most imperfect earthly world and its constant tug of war between good and evil, you just have to learn to take the good with the bad.

After all, the evil one has been working mighty hard since the Church’s institution to overcome it (through pedophile priests, Church leaders abandoning their vow of poverty, and fathers promoting partisan interests and favoring the giant hypocrite over the imperfect winner) so instances like this should come as no surprise anymore. The devil’s gotta work, too, ya know. The guy’s gotta do what he’s gotta do. And guess what, he loves holier-than-thou hypocrites the most… the ‘crucify him!’ types.”

Do you agree with GRPSHORTS and Mike Acebedo Lopez? Please comment below so the public may know your thoughts of the hottest buzz today.